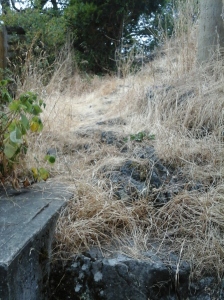 Highview Street Park is a natural Garry oak meadow located on the rocky southern slope of Peacock Hill. About a seven hundred meter square area, with natural seating on the rocky outcrops and lovely spring time blooms of camas and other lilies. Looking a bit further, Summit Park is seen directly south with the Olympic Mountains of Washington State, USA, in the distance. A rough footpath leads from the north end of Highview Street into the meadow and down to Highview Street. The northside of the park is along Tolmie Avenue between homes number 1225 and 1303. Highview Park about half a block south along Highview Street and has a playground. Mars Street Park is about a block west along Tolmie Avenue and Jackson Street Park, with a playset, is three blocks west down Tolmie Avenue.

This site uses Akismet to reduce spam. Learn how your comment data is processed.