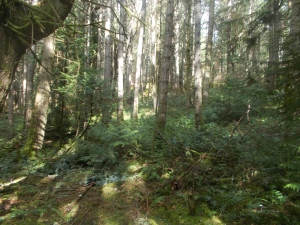 The 174 hectare John Dean Park is managed by the Province of British Columbia with the assistance of the Friends of John Dean Park Society. The land was donated to the province in 1921 with additional donations by neighboring landowners. The parkland encompasses most of Mount Newton and lies in both North and Central Saanich. This place of refuge, or Lauwelnew, has an additional historical meaning as a safe haven from the flood for the local First Nations in the Saanich area. The trails through the forest and woodland meadows of John Dean Park are just beautiful for hiking and dog walking. There is even a bridle trail on the western slope. Give yourself at least an hour here or more. The six kilometers of interlinking trails have varied levels of difficulty. Following the service road as it winds through older second growth forest of Douglas-fir and cedar trees leads to a viewing platform at 333 meters, the summit of Mt Newton. The view is wonderful and takes in the pastoral Saanich Peninsula and across the Salish Sea to the Cascade Mountains of Washington State. A huge air traffic radar dome, built in 1989, is at the summit next to a historical survey point (WMHXM7) and a communications towers.An earth gravity place marker, a popular geocash site, and the water reservoir are also near the summit. Most of the trails are named after other land donors and include Barrett Montfort, Merrill Harrop, Woodward and Skipper’s trails. The trail that connects from the northern trail head is the Slektain Trail. Additional interlinking trails are the Surveyor’s and Thunderbird trails. Maps are available online as well as a several locations throughout the park. These trails allow exploration of second growth forests with season creeks, small ponds and wetland areas. Some of these areas were developed as the homestead of Mr. John Dean prior to donation of the land. There is a toilet at this park.

John Dean Park can be reached from Pat Bay Highway. Leave the highway at Exit 26, the McTavish Interchange, a unique and confusing series of roundabouts that make a multi-circle roadway overpass. Take the third exit onto McTavish Road then take the second exit to stay on McTavish Road. Follow McTavish Road to the East Saanich Road intersection. Turn left onto East Saanich Road past the Panorama Recreation Center on the right and look for the park sign at Dean Park Road. Dean Park Road winds through the Dean Park residential neighborhood to the park entrance. The gravel parking lot has room for several cars. This route is closed to cars during the winter months. Alternatively, the park can be reached from the west side using Alec Road off of West Saanich Road or from Thomson Place on the south side of the park. This trail leads through Haldon Park in Central Saanich. There is also a north entrance from Dunsmuir Lodge property with a pathway that leads to Slektain and Barrett Montfort trails.

See the provincial parks of British Columbia and Friends of John Dean Park websites for maps of the trails.

This site uses Akismet to reduce spam. Learn how your comment data is processed.